Letters from a Disappearing Continent 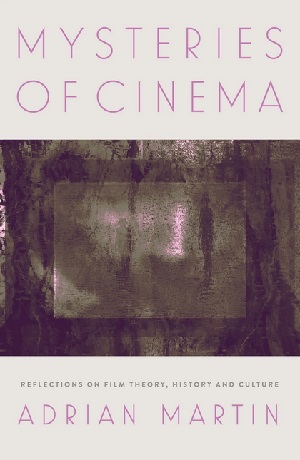 There’s a new paperback edition of Adrian Martin’s Mysteries of Cinema coming out and that feels like a good opportunity to return to the book (the hardback one was published 2 years ago and costed so much, I assume only libraries bought it). This is a collection of forgotten pieces of Martin’s writing with 26 articles published between 1982 and 2016. The earliest one called “Scenes” is an attempt at dealing with fragmentary moments in movies in a similar radical style and the newest one “The Files We Accompany” (co-written with Martin’s partner Cristina Álvarez López, herself an excellent film critic) is itself a collection of short companion pieces for Martin and Lopez current video criticism work. The opposition between them says a lot about the richness and variety of the writing in this book.

I should probably mention here that I’ve not only been reading his writing for some 20 years but that I regard Adrian as a friend and that he has on a few occasions published me on his online journals. He has in the past few years often complained that I’m yet to sign on his website Patreon after my 15 years of public jokes about its “launching soon” status (sorry Adrian, I don’t own an international credit card). So this is an appreciation from a closer friendly place.

Martin started his career as a film and cultural critic in Australia in the early 80s and moved in 2006 from journalism to academia (at least until his more recent work on his website). One might say Mysteries of Cinema function as a revisit to his early writing by the point of view of his later work. It is an unusual book, a collection by a terrific film critic that includes very little actual film criticism. It is an odds and ends collection whose emphasis is in panoramic views of a series of subjects that seem to exist at the borders of academia without committing to it. Film theory is very much on its mind and Martin is a writer who is very aware about its multiples developments, yet it remains proudly outside of it. Indeed, Martin suspicions about film theory in the terms it is developed in academia shows up multiple spots. It is a hostility towards an institution and how film theory functions inside it. One might call Mysteries of Cinema as a proud book of film thought instead of film theory. Its titled after Raul Ruiz’s Mysteries of Lisbon and it has certainly more to do with Ruiz’s Poetics of Cinema than, let’s say, David Bordwell work.

The Ruiz connection is a good one. Mysteries of Lisbon like a lot of Ruiz cinema is about the possibilities of fiction. A collection of tales, myths, conspiracies, plots and counter plots. Ruiz is, as usually, interested in cinema as the depository of a house of fiction. Ruiz is a filmmaker and Martin is a film critic. His book is obvious very interested in how movies present the things they want to show, but it is even more interested in how one watches films. It is a book with two main interests film spectatorship and film criticism as practice. The main runner that units these articles is how movies are received in its multiple forms. My favorite piece here is called “Entities and Energies” and it is one of the few closer looks on individual films, it deals with Peter Tscherkassky’s classic avant garde short Outer Space and its relationship with Sydney J. Furie’s The Entity, the mostly forgotten horror film that it uses as a basis for. It is about how one kind of images are turned into another, the relationship between experimental and narrative film, how they are both received by audiences and how film writers process and reconfigure those differences. It is a lot of ground to cover in some 15 pages and it offers a good introduction to many of Martin’s preoccupations.

The book’s heart is probably its most dated article “No Flowers for the Cinephile”, a long history of Australian cinephilia published in the late 80s. As much an informative piece for those of us who cares for those localized histories, as it is an evocation both of cinephilia as a form of church going that is very attractive to some of us and alienation of cinephilia that exists on practicing it far away from the France/USA center of “cinephilia as an idea”. It is very much a pre-internet article and a window into a very different film culture, but it benefits a lot from how it can move from the local to global with ease. Martin internationalism has always been along with his open-mindedness his greatest assets as a film critic (he once tried to recruit me to organize an English collection of Jairo Ferreira’s writing!) and this article is a very particular and rich way of applying this internationalism to a local subject matter. The datedness is part of what is so charming about it, what is so rich and evocative about it is what the reader brings to it, it covers Australian cinephilia through the first three decades of Martin’s life (and as such it is as much autobiography as cultural criticism) and its three-decade distance to our now seems every bit as essential to how one reads it (and Mysteries of Cinema as a whole).

That open-mindedness shows up time and again in the multiple subject matters that Martin covers through the book as he is equally at home writing about tendencies around post Nouvelle Vague auteur cinema or early 90s home invasion thrillers. Mysteries of Cinema showcases Martin as a historian most in the way it traces a series of evolutions that can be both related to formal matters or narrative ones (the chapter on gangster film is a highlight). There’s great writing on the sociology of long forgotten genre films (Martin long love for teen movies show up as expected) and surrealism in movies and the way they flow natural between each other is a major formal merit of the book. What should be a limitation, the very eclectic themes, help enlighten each other.

He is interested most in how movies affect their audiences and the best long term history bits here deals with changes around how specific processes happen through time. On this, Martin writing brings to mind the best work of Raymond Durgnat, another very democratic film writer whose work boil down to thinking about how we all relate to movies and how movies relate back to us. Mysteries of Cinema is the history of a fascination with movies, of spectatorship that is by definition very participant. Like Durgnat, Martin is a very perceptive film passeur (one can think here of the article on the female gothic throughout film history) tracing connections that have as much to do with formal matters as they have to do with notions of film watching.  Criticism matter by the way it traces these multiple modes and how each of them affect us on their own manner.

And that brings us to the subject of film criticism. Martin’s characteristic generosity also means he is almost always in constant dialogue with his peers. That can show up in multiple ways like the already mention suspicion towards the academia or in how the piece on sadism on contemporary movies is very self-aware about the cultural reception of his main chosen auteurs like Haneke or Tarantino and the way the contemporary romantic comedy chapter doubles as an attempt of dealing with the genre beyond the major critical writing on it. Criticism is really the direct subject matter of a few pieces like the opening more prepositive section, the final essay that has the current strands of video criticism on its mind and the wonderful “The Offended Critic” about moral outrage in film writing, a fascinating and never easy exploration of ways film writing can explore visceral moral reaction against films that never takes easy shortcuts, but remains troubling ambivalent (as Adrian remind ones one don’t write about movies without becoming the offended critic once or twice). One might say the early and two final sections deal with specifics of how one put film thought on paper while the midsections with film spectatorship (with “No Flowers for the Cinephile” splitting the difference). It might be useful to observe that I’ve knew previously most of those early and late chapters and almost nothing of the middle ones.

Mysteries of Cinema can feel like a curious distant object, far away from both film journalism and academia as they are current practiced. Martin can be a critic equally fascinated with Kiarostami, Garrel or Ferrara as he is with romantic comedies, cheap thrillers and teen movies. A classic low brow/high brow film critic in some ways (when I first found Martin as a 18 year old college freshman, his position as a film critic that is reacting against the middle was certainly his main appeal), but one that feels very alienated from both the world of big film festival fairs that dominated serious film thinking and the disneyfication of his once beloved pop cinema. This can show in his decision around the time this book was been prepared to concentrate his efforts in a personal website that seems aimed at big fans after a long period involved in international online film magazines (a movement that brings to mind certain middle aged pop musicians’ decision to concentrate in their reduced but very passionate hardcore fan base) and it is all over this hard to classify book. Mysteries of Cinema don’t seem to belong to current film culture in much the same ways as it is a film critic collection without film criticism and a book of film theory high suspicious of film academia. The first section is called “letters of introduction” and this epistolary principle carries through the book, I called it early on a book of “film thought” instead of “film theory” and part of what is so valuable about it is how it can be seen as a collection of letters from a cinephilia world that is with every passing day more fragile.