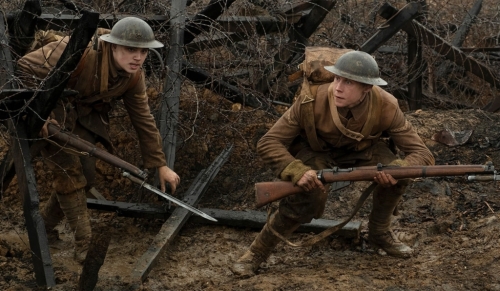 Most of the discussion around 1917 centers around its false one-shot structure. It is without a doubt a showy dead-end stunt, but unlike something like Birdman, to get another “Oscar movie” from a few years ago that tried a similar stunt, the immersive quality does have a function. As a vehicle for cinematographer Roger Deakins, 1917 true star, and as a pure spectacle it does deliver a certain amount of small pressures, the more troubling aspects aren’t the execution itself but the foundation and consequences behind. I understand why cinephiles can be suspicious of such stunts, but I personally have no more problem with them than I do when a movie is shot in B&W, the complains have a reactionary undercurrent that suggest the way most commercial movies are made is the natural standard bearer for how movies should look. There’s something deeply stupid in movies like Sebastian Schipper’s godawful Victoria (2015) but that comes from trying to make an elaborate drama in conditions that don’t support one, a movie like 1917 that is really a series of long shots well disguised together is much more likely to sustain itself. There is little to the format beyond formalism as a form of Hollywood showmanship and a weak “war is one continuous carnage” idea, but that on itself is a starting point to be investigated and not an end.

The continuous shot does often suggest the chaos of war. It brings to mind in a very different way Spielberg’s installation opener of Saving Private Ryan, both maximalist action movies about “war as hell”. Spielberg achieves that through a saturation of violent information while Mendes does so by adapting the clarity of the “man on a mission” template to a similar maximalist format. Some of the more interesting dramatic force comes exactly by the contrast of the essentialist moving from point A to point B arc and the heavy handed filmmaking around it. On individual moments, Mendes and Deakins both combine to find interesting images and occasional “war is absurd” escape points. And it is hard to deny that some of their staging decisions can be creative and “the how they will pull that?” factor thrilling. Deakins mobile camera is always impressive when negotiating the tenser dramatic space. At some point, 1917 does become strait-jacket by its format, there is a law of diminishing returns for such a trick and what is spectacular the first time is merely technically competent by the fifth. Some of the decisions later on become a matter of presenting problems for Deakins more than dramatic possibilities for the film to explore. There is also both too little and too much drama in 1917, the film is too busy yet very simple and that has its costs in the end, the final scene with Richard Madden is far more hollow than Mendes hopes for instance.

There is something troubling fetishistic about 1917’s art direction. The “you are there” quality from all those severed limbs scattered throughout the trenches particular early on as if war violence can be turned into a Hannibal Lecter’s lair. It is realistic, but much more than the one shot, it calls attention to itself in a way that is more about the filmmaker’s power inside the industry than the casualties of war. Like Spielberg’s opening scene or the more recent Dunkirk.  scale is meaning in 1917 and war becomes a function of the hotshot director more than an atrocity. The problems of making a movie about the spectacle of war is one ends implicated in it. The filmmaker becomes more of a war general putting together a bloodless campaign and the anti-war feelings easily flooded by the large scale of the operation. As Samuel Fuller, an actual war veteran, used to say all war films no matter how careful ended up serving as recruiting posters. The big filmmaking too much fun, too easily corrupted by the seduction of the material.

Some of 1917 coverage, slave as cultural journalism always is by the dictatorship of now, tried to pass 1917 as some high point of WWI movies, if not the high point. That is especially troubling giving the usual differences in perspective between WWI and WWII movies. The Great War and its larger European trauma have always welcome far more troubled accounts of war and its casualties from the big humanist bloated productions of 20s and 30s (from Ford’s Four Sons to Milestone’s All Quiet in the Western Front to Bernard’s Wooden Crosses) to the more eccentric pleas for peace that the approaching war brought (Lubitsch’s Broken Luillaby, Renoir’s Grand Illusion, Gance’s J’Accuse) to the more abstracts discussions of war as futile killing machine like Kubrick’s Paths of Glory. Nazi’s menace gives World War II human sacrifice its meaning (most of the more absurd anti-war takes are usually set in the Pacific front), no such easy out on World War I accounts, death here is just a stupid sacrifice in cannibalistic last grasp of European imperialism (it is about after all transporting the barbarism which colonies were always treated to the metropolis). None of this registers in 1917, I can’t think of a WWI set war film that has so little anti-war sentiment. The horror of war here is just perfunctory, the minimum amount necessary to qualify as a serious movie and not a boy’s adventure. 1917 whitewashes the specificity of “the great war” in the name of today’s spectacle. It is an ideal war movie for an era that has progressive less uses for thinking about the past.

It is also much like Dunkirk a stealth Brexit movie. Much like the movement, the foundation here is nostalgia for Great Britain’s wonderful imperialistic past. Mendes big tracking shot doubles as safe return from an early era when the British matter, when them and not Americans are the big front line of the world war. Like Dunkirk, 1917 makes a lot of its soldiers’ faces, young white men serving as sacrificial lambs under figures of authority played by more recognizable British stars (filmmaking and war machine are such one and same that star power defines military rank). It is a great Great Britain, at the center of world conflict, fighting those devious Germans and before any multi culturalism (no soldier from the colonies on sight). The final touch is the dedication to the filmmaker’s war vet grandfather and the reveal the movie is “based” in his tales giving it the great generation approval of a glorious long gone past.

It is not that Sam Mendes made 1917 out of any particularly devious intentions, if the film is political questionable that has to do with his manners more than objectives. Mendes isn’t an auteur as much as an engineer, his is filmmaking as problem solving, a series of designed decisions out of questions he himself settled. It is no surprise his best two movies are his two James Bond entries (Skyfall and Spectre) because they ask of him exactly to be a good traffic cop with intelligent ideas. 1917 is a dumb movie because it thinks very little ahead of its next movement, Mendes wants the audience to think of his film as analogue to the experience of the soldiers moving through the war scenario, but he really is the war general who send them to battle. No thought seems to have gone to the large implications of filming any war and this war in particular about the impact of designing the carnage as it is done here. Most of filmmaking functions on small decisions and to be fair far too much criticism worries about large questions when movies operate through negotiations of smaller matters from a scene by scene basis, but sometimes one has to question why and how to film certain things and that never occurs to an engineer like Mendes because results are circumstantial and challenges are everything. Starting and ending your movie with matching shots of an exhausted soldier don’t make for a commentary on war. And so 1917 can end as a chilling portrait of war complete out of control from its filmmakers. If the film has some value it is as an accidental portrait of war as showmanship in the 21st century, the young getting butchered out of little more than it will make for a great show be it on news or the film screen.