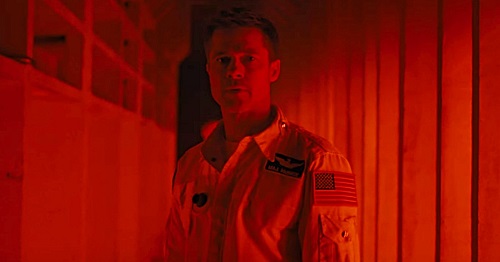 Ad Astra is less 2001 than 50s science fiction literature in its construction (as far as Clarke goes it is closer to something like a Fall of Moondust). It is a space western, The Searchers by way of its 70s reclamations as one should expect from Gray. Humanity’s insignificance in front of the cosmos and its responsibility towards the community intertwined together in closer way to that of valleys of American west only expanded by the largeness of space. The genre shift only enlarges the scale if which the feelings resonate.  Like his other work from this decade it is very much about the imperialistic foundations of western fiction which it recognizes, but does not exactly interrogate.

It is a movie about an existential dread, humanity is alone in the universe, it is all so vast, but also so scarce. We are dying and doing so alone. There’s multiple references to lack of resources and the feeling that space expansion is the final escape remains in the subtext. Space is not the final frontier but a necessary one, militarized and robbed of its sense of discovery.  Ad Astra is as much about climate change and humanity extinction than any so-called daddy issues even if it is all filtered through Gray’s usual preoccupation about the toxicity of family relationships (and he as always identify family with death anyway).

It makes for a fascinating double with The Lost City of Z (it is pretty much Z retold from the point of view of Tom Holland’s character in some ways), again it is an epic of exploration predicted in a desire to abandon western civilization as we know it and the will to create a new world of fiction, the vastness of the universe against that of the Amazon that can barely contain it on the previous film. Again haunted by notions of imperialism and men’s place in destroying it and about a sense of civilization decay. The desire to escape modulated by the certainty that everything around you is going dead soon.

Unlike Z this has a pacified ending, even if not a fully happy one (man transcends his self instead of disappearing inside it) and it is a bit easier to negotiate its imperialist notions when they are applied to abstract space instead of a real place. Speaking of imperialistic notions those Verhoevian jabs both in the capitalized moon and militarized NASA are quite a sight in the middle of Gray’s usual somber drama.

Ad Astra is probably the most radical movie out of a Hollywood studio in ages in that it is a true one-character show, this is about Pitt and how he relates to the world in a very satisfying physical way. Ad Astra is sort of a silent monologue that is undercut by occasional moments of exposition. A fiction imagined through a character’s physical presence and the weight he carries instead of dramatized through conventional scenes. A literal action film. That makes even a bigger shame the obvious post-production tinkering (some of the editing can feel uncertain, 85% of Pitt’s narration could easily be cut). This radical interiority is probably why Ad Astra has been often linked to Malick, but again its narrative modes seem to me more antiquated as they often are in Gray, he is a drama traditionalist if one interested in pushing it through a sense of exhaustion. There’s a body here when Malick left that behind ages ago.

A key difference between James Gray’s 10’s work from his early stuff is those early films have an ethnographic interest in locate those family relationships on larger communities while the later films position it in relation to a larger historical tapestry more ambitious, but less specific. Those were immigrant dramas and the newer ones historical panoramas. In common, the sense that been absorved by society remains uncertain.

It is very exciting to watch Gray negotiating his tactile grounded style through a series of artificial and virtual sets. Ad Astra has no real images, but Pitt’s presence. There’s a lot of emphasis on human body, what it can or not sustain. Physical fatigue against the needs of fiction. Worth noticing the emphasis on menial labor inside the ship, in repeated actions and physical immersion, there’s something very cinematographic yet dehumanizing about it, but that sense of work is very much the needs of a society (and drama) of conquest. At same time, a lot of the drama is resolved through images of the weight of the body against gravity, the relationship between character and the world literalized.

The most important scene here isn’t the pre-ordained showdown with Tommy Lee Jones (the son surpasses and replaces the father, we know that from the early moments), but the big one with Ruth Negga that is positioned almost exactly in the middle of the film, because it is the only moment in Ad Astra that a different perspective than his is acknowledged. There’s a functionality as there is to all exchanges in the film, but her point of view is real and different from Pitt’s and Ad Astra’s drama gets expanded in that moment beyond his tunnel vision (it is no accident she starts it not with her personal connection to Jones, but by reminding him that she is responsible for 1100 people). At that point, Ad Astra stops being about men and becomes about humanity if still filtered through to quote Kipling’s famous poem (itself about colonialism through fathers and sons) white man’s burden, but that is the limits of imperialistic fiction.

There’s something sinister about the movie’s space program. Ad Astra does a very good work of by attaching itself to Pitt’s perspective, suggests a whole series of actions and wills that remain off-screen. A film of conspiracies and counter plots seen by the gaze of a good soldier, totally subordinated to the needs of family and society. Even when he takes command he does so excusing himself and waiting for history’s judgement. The audience in general is always a step ahead, able to get the vague hints and come to unsympathetic conclusions. From the essence of the mission (to save/kill the father), to the sketched moments like the scene with the angry monkey victim of some testing until the print the legend type of historical mystifications everything reinforces how this conquest of space is functional and violent. Far away from the imagination of the discovery of a new world, but the deceptions of an older one, repeated on echoes. Gray’s drama exists in the space between them.  The desire to believe and the certainty of disappointment.