Images at the wreckages of history 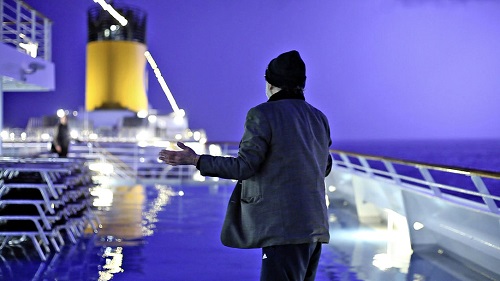 From the indistinct to the most distinguished, one comes to the third and inevitable arc: the civilizations. With it, the dissolves return, the possibility of producing new senses and readings. The chaos mediated by the artist becomes history again. At one point in Film Socialism, a voice over says that Hollywood was called the Mecca of cinema because it manage that a large number of people to turn at once, at a single place: the screen. The movie, however, is the gaze of an individual. Cinema – or art – remains the possibility of the subject’s ultimate resistance, even if this subject comes to the shards of those who print a world flying before their eyes (or, like in a thought-film, inside their heads) – Fabio Andrade on Film Socialism

The actresses’ table, beyond all thematic construction, is itself a way of saying that the cinema is a historical monument as large as the ruins of Pompeii or the Parthenon, Naples or Constantinople. Several layers of history are seen in an Oliveira film, and the passage between them is what makes up all the beauty that never ceases to amaze us, as history and the human in general amaze us. – Ruy Gardnier on A Talking Picture

Jean-Luc Godard shot his Film Socialism in 2008 at the Costa Concordia cruise chip at the Mediterranean sea. The shoot was documented by Godard’s nephew Paul Grivas who is a mostly a photographer. In January 2012, the Costa Concordia collided with rock and that luxury symbol that was explored by the Swiss filmmaker sunk. Ten years later, Grivas finished Film Catastrophe an ostensible making-off whose images are heavily informed by the subsequente sinking of the ship.

Focusing on Godard seem as misguided as the mainstream discussion of Film Socialism that was obsessed with subtitles or lack of them. This isn’t a movie about Godard the artist as much a reappropriation of his shoot and some of his interests in the early movie.  Richard Brody New Yorker review predicted only sees it in terms of exploring Godard’s methods, a self-serving movement (Brody is of course one of Godard’s biographers) that mostly excludes Film Catastrophe of its own merits. And most of the little discussion I’ve found online follow suit.

It is a making off, but unlike most documentaries on auteur films, the focus here is labor not the artist. We see Godard at work with his minimal crew, we see what it takes to make such a film, how Film Socialism shoot existed in the large environment of Costa Concordia and its passangers. Even when the movie stops to record a more promotional moment like registering Patti Smith’s appearance it does so in a manner that hollows it of its original intentions. So the making-off here has no interested in selling the original movie and it also has no interest to work on terms of the economy of the current film festival circuit and sell Godard’s genius. Film Catastrophe isn’t interested in Godard as some brilliant figure pulling a film, but as someone who is trying to control outside factors towards achieving a feature film (emphasis on negotiation instead of some mystiying “direction”).

The cruise ship was always a symbolic space in Godard’s own film and Grivas approach doubles down on it. Film Catastrophe wouldn’t exist if the ship didn’t eventually sunk, so the images are haunted by this notion of disappearance. The movie’s most Godardian effect i show it is a film about the colapse of images over each other and the meaning of this overlap on history (at least European history). It is footage gains meaning because now Godard labored in a wrackage. What is already this ghost place for European society has now become fully imaterial.

As such, I was thinking far more about a different cruise movie on a sinking ship, Manoel de Oliveira’s A Talking Picture which offered an aristrocatic discussion about the disappearance of Europe with history materiality serving as an anchor. Oliveira’s film come out five years before Godard start shooting Film Socialism ando ne might argue the two movies were in a dialogue. Grivas offer a new read of said dialogue because the sinking pushed the material symbolic gestures even closer to Oliveira’s diagnosis (A Talking Picture it is Worth remember ends with its own symbolic ship getting blown up).

Like Oliveira, Grivas proposes an archeology of a neoliberal Europe sunking at the sight of a disappearing history. Film Catastrophe and A Talking Picture are above all else movies who use the past to anchor the now. Its preocupations are very much in the present tense even if they are often refering to events from years ago. A lot of Oliveira’s film present history lessons (Leonor Silvera plays a teacher) using a series of historical places and monuments as signposts. The pedagogy becomes Godard making his film and the materiality is moved from actual historical places to the traces of original shoot captured all those years ago. An act of recupering an image of a comndemed space. The ship in all movies serves as a reminder of contemporary Europe ready to disappear, but only on Grivas film does the disappearence feel concrete.

It is worth pointing out that the gaze in both A Talking Picture and Film Socialism is rather aristrocatic (very conscious on Oliveira’s case, not so much in Godard’s) and Film Catastrophe’s feels far away from either with its desire to combine the surface of symbolic images with a sense of real work involved in producing them. Those were ship of fools in their own way, Film Catastrophe’s produced Film Socialism.  One thing for sure, the decadentism is even bigger now. We moved from socialism to catastotrophe. The disappearing knowledge from Oliveira’s early 20th century world and the desire to register/act over waste from Godard’s mid to late 20th century one are nowhere to be seen anymore. Civilization gives away for its questioning and now its wreckage. What’s left is the final traces of immateriality of an older order. A peek at a disappearing world. These images are organized after the sinking, the ghost space is a dead space. From the 21st century artist what one can have is making sense of the wreckage, so a new struggle can be fought.